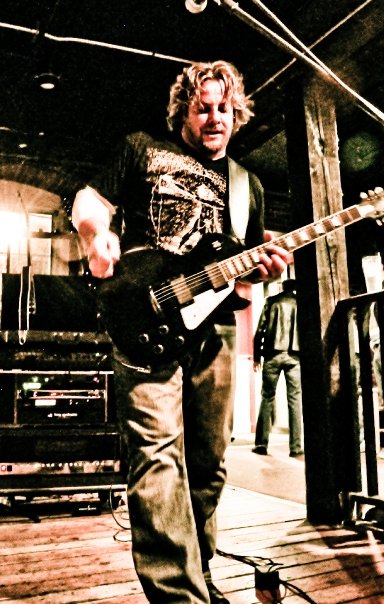 Bernie has been teaching guitar, bass, violin, mandolin and ukulele since 1991

Bernard “Senchant™” Birgenheier is a self taught (prior to Berklee College of Music) guitar virtuoso & composer. He was born in April and raised in St. Paul, MN to James (Architect) & Lila Birgenheier (loving home maker). One of six kids he quickly went his own way gravitating to the guitar as early as age three. Although he was not born into a family of musicians, his parents always gave him full support in his musical endeavors. By 5yrs old, he would “throw concerts for the family” in the living room after church on Sunday. Quickly into his teens he co-founded a 5 piece high school band called “April Fools.” For youngsters writing and performing their own originals, they did very well in the local music scene. After 3yrs of touring with April Fools, Bernie decided to leave and form a new 5 piece group called “Love Ride Nine.” Love Ride Nine achieved almost overnight success opening and touring with groups such as 311 and Clutch on small national tours. Meanwhile, holding a residency at a local Kansas City rock club (Lone Star) every Friday night. Bernie was 17yrs old and realizing his dream of becoming a professional guitarist. Shortly thereafter, a virtual career ending tragedy happened… Bernie was in a bad car accident as a passenger. The second phalanx bone of his ring finger on his left hand (fretting hand) was shattered! Upon it’s healing he lost the ability to bend his ring finger at the first knuckle. This did not detour the young guitarist as he continued on with Love Ride Nine. He persevered opening and touring for national groups. After 7yrs of gigs and touring the midwest, (his finger still unable to bend), Bernie & his Love Ride Nine bandmates relocated to Boston. Bernie’s dream was to go to Berklee College of Music and further his studies. Once in Boston, he sought out an orthopedic surgeon at Mass General and they were successful in removing the scar tissue impeding the mobility of his left ring finger. After some healing, his finger regained full range and quickly found it’s needed dexterity! Elated and feeling “more than grateful,” Bernie then proceeded to apply to Berklee… he was self taught… “who is this kid they asked…” Part of Berklee’s application requires “no less than 4yrs of private lesson training.” Concerned, yet focused, word of mouth lead him to Boston College’s guitar guru, Erik Kniffin! Erik worked with Bernie over the course of 4 months and filled out the necessary paperwork Berklee’s application required. Although, Bernie had not studied with Erik for 4yrs, Erik had no doubt this young man could handle anything Berklee would throw at him. Weeks later and to his excitement, Bernie was asked to come into several Berklee auditions. Because he was self-taught, they placed him in front of three separate interviews (performance-based) with several different guitar performance professors. Out of four categories, Berklee ranks students on, Bernie received 7/8, 7/8, 7/8 & 5/8! This ranking system is used to appropriately place new students in classes at the school. A few weeks later Bernie received his acceptance letter and was excited that all those years/hours of serious practice were paying off. Beginning in the fall of 1997 (24yrs old) Bernie entered Berklee College of Music as a Freshman. He continued on to do their 5yr dual degree B.A. program in the disciplines of Guitar Performance & Film Scoring.

Throughout his studies there, he created a very close bond with Armand Qualliotine. A “true genius” in Bernie’s eyes! Because “Professor Q” was so proficient with lessons/assignments, education to back it, and a true investment in the curiosity of a hungry mind, he became Bernie’s chosen mentor. As Professor Q’s curriculum became more demanding, the great professor confessed, “You’re writing some very intense music… I have to study your homework assignments.” Followed by, “You are truly a ‘Sentient’ Being.” Bernie later adopted this, creating the phonetic spelling, “Senchant™” (‘a’ representing schwa’s ‘u’ sound, pronounced “sen(t)SHunt”) for his “stage name,” Artist Relations and copyright purposes. (Call him “Sen(t)SHunt” and see how fast he lights up!) Senchant.com

He has since toured locally and nationally with:

Beyond his great education at Berklee and friends/relationships made there, the many years of “real world” live experience is where becoming a professional guitarist is. One of the nicest compliments he received was, “…fresh ideas and inventive. I love anything he produces!” Mark Santangelo, Sony Mastering Engineer, Sony Records, NYC (Red Hot Chili Peppers, Jane’s Addiction, Aerosmith, NIN, etc) It is this “hands on experience” that separates Bernie from many other area teachers. In 2010, he decided to retire from the hectic routine of touring. Bernie has now focused all his efforts on designing “the area’s finest music lesson program.”

Great perks he can offer to his students are through his endorsements. ie “Free GHS strings” & “50% off Arobas Music Guitar Pro Software!” Bernie is always studying, learning and reaching out to new and innovative companies to create Artist Relations. “Anything to inspire, encourage & help a student” is his credo and part of his desire to give back. His passion and drive is like no other and he always loves meeting new guitarists, young or old!

Session guitarist and bassist in NYC for:

Session guitarist and bassist in Boston for:

The Next Paradigm Book & CD Project